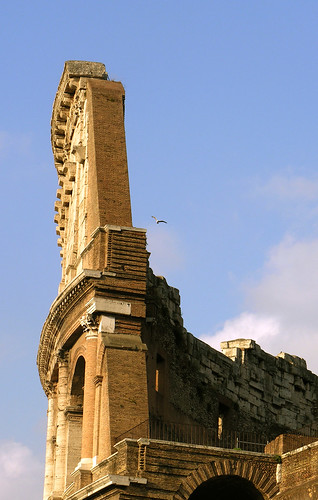 Tip for the traveler: buy your combo ticket at the unpopular Palatine, not at the Colosseum! We felt awfully superior breezing past the long line of punters waiting to buy their tickets. We were the last ones in, too — they swung the gates closed behind us.

Unfortunately, my camera batteries were running on fumes by the time we got there — this was at the end of the day, after the Palatine, the Capitoline Museum, and the Forum — so I was forced to be a little parsimonious. I did get a few shots in, though it meant circling the whole arena — twice, once on the lower level and once on the upper — to find the late-afternoon light. Let's just say Colosseum is a good name for it. By the end, we were thinking wistfully of the sail-like awnings that used to shade the spectators.

Perhaps more than anywhere else in Rome, it was easy for me to imagine what it must have been like to attend the games as an ancient Roman — maybe because I'd been to a baseball game a few weeks before, and neither stadium design nor sports fandom has changed much in 2000 years. To underscore the point, the museum on the upper level contained a case full of ancient concessions that archaeologists had sifted out of the soil — chicken bones, pomegranate seeds, peach pits, pinecone scales. I have to admit it sounded pretty appealing, buying a crock of sunflower seeds and spending the afternoon with my buddies (and 50,000 of my most bloodthirsty fellow citizens) at the ostrich fights.