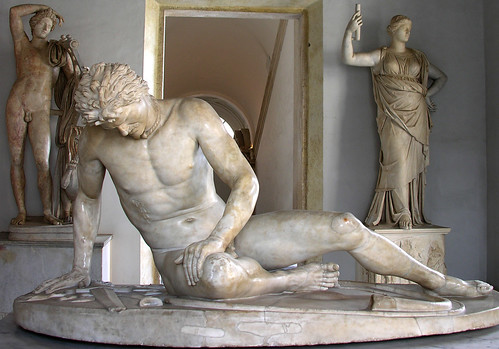 I hope y'all are enjoying these photo posts, because I've now uploaded a solid 18% of my pictures. Whoo-boy! This set is from the Capitoline Museums, which are packed full of classical treasures — like the remarkable Dying Gaul with his broken sword, above, about which Byron wrote

He leans upon his hand—his manly brow
Consents to death, but conquers agony,
And his drooped head sinks gradually low—
And through his side the last drops, ebbing slow
From the red gash, fall heavy, one by one.

The museums are contained in two buildings cupped like parentheses around the Piazza del Campidoglio on the Capitoline. A subterranean passage links them, and to judge by the echoing silence therein I suspect most tourists experience museum fatigue after the first, and never find their way to the second. The museums are built around structures left in situ — the massive foundations of the Temple of Jupiter Optimus Maximus stick up through the floors at one point, and you can take a glass-walled elevator ride through the stratae of an excavation.

This was the first time I learned that two fully-charged camera batteries are not sufficient for a day in Rome. But I did get a goodly number of photos. ( Collapse )

My complete set of Capitoline Museum photos is up on Flickr, and as I add new sets they will go into my Italy 2009 collection.

(Edit: Muttering to myself, I just summed up the whole trip: "Never have I seen so many things with their own Wikipedia articles!")
Collapse