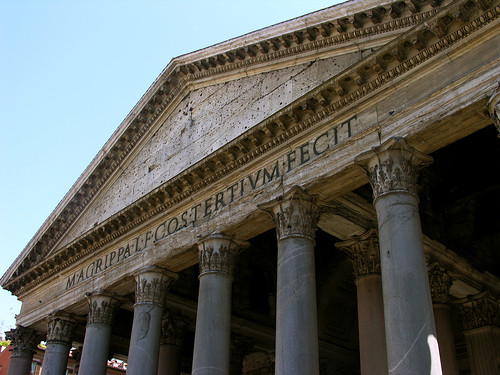 The first sight we really saw was the Pantheon. We passed hatfuls of ruins getting there — the Largo Argentina, the Theater of Marcellus, the Circus Maximus, the Portico of Octavia (which sprouted from the sidewalk beside our lunch restaurant) — but this was the first structure (other than our hotel) we entered. It was my first experience with the monumental scale of worship in the ancient world — the interior space would just contain a sphere 142 feet in diameter. It was converted into a Christian church in the 7th century, which saved it from the fate of the Colosseum and other structures — although much of the marble facing was reused at one time or another, and Pope Urban VIII melted down the massive bronze pedimental sculpture for cannon, which led one anonymous wag to say, "What the barbarians didn't do, the Barberinis did."

My complete set of Pantheon photos is up on Flickr, and as I add new sets they will go into my Italy 2009 collection.
Collapse