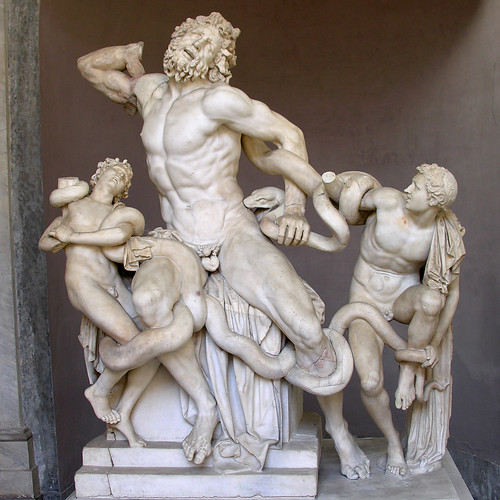 I got teary-eyed when I saw the Laocoön. Couldn't move. It's one of the most beautiful things ever created by humans, in my book — muscular and graceful, solid and dynamic, perfectly geometrically balanced. It somehow manages to be bitterly tragic and breathtaking at the same time, poised right on the cusp between human pain and aesthetics. And it utterly refutes the idea that art and the fantastic can't coexist, since it's really just a standard scene from a monster movie (Attack of the Killer Sea Serpents!). This was a bit of a pilgrimage for me — I'd wanted to see it for years and years — and as tour groups came and went like surf in front of me I stood in the Laocoön's alcove in the sunny Cortile Ottagono, smiling and crying.

If you don't know the story: The fellow with the beard is Laocoön, the priest who warned Troy about the Trojan horse ("Beware of Greeks bearing gifts"). Even though Troy ignored the warning, Athena (or perhaps Apollo, or Poseidon) sent sea snakes to kill him and his sons as punishment. The sculpture was dug up in 1506 near Nero's Domus Aurea (which we'd tromped all over the day previous), and it quickly became the very first acquisition of the Vatican Museums. For a long time, Laocoön's right arm was missing; it was displayed with a 16th-century replacement, heroically outstretched and holding a loop of the serpent at bay. Then, in 1906, his (possibly) real arm was found in a marble yard: bent backwards, submissive, still straining but hopeless. 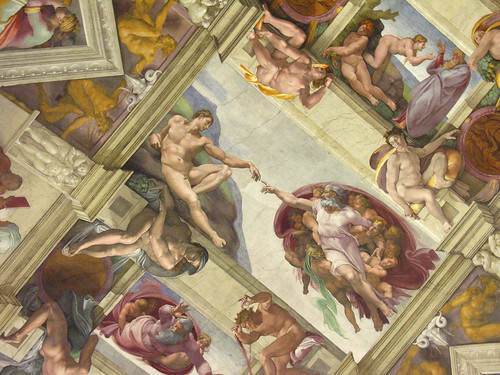 It turns out there are things other than the Laocoön in the Vatican Museums. Since they were unexpectedly closed on Monday (thank you, Saints Peter and Paul),

adfamiliares and I were forced to take a whirlwind tour — only three hours, which counts as "whirlwind" for the Vatican Museums — on Tuesday morning, before we caught our train to Florence. It's strange to be surrounded on every side by priceless things you've been seeing all your life in books, things that launched whole artistic movements — I felt privileged, and a little overwhelmed. The crowds were like a river in most parts of the museums, but we danced pretty deftly through them, and saw everything we'd hoped to see (if not as thoroughly as we might've liked).

All my Vatican photos are up in my Vatican Museum Flickr set. As I upload more sets, they'll show up in my Italy 2009 collection.

A quick break from all-Italy-all-the-time to plug Virtuality, the Fox summer pilot from Ron Moore (the Battlestar Galactica guy). I watched the two-hour pilot this weekend, and was shocked to find myself watching a really excellent hard SF series that owes a debt to the ideas of Arthur C. Clarke and the crew dynamics of the first third of Alien. It might legitimately be called slow or dense, but I'd rather say "thought-provoking" and "unhurried." I frankly expected the sort of "Holodeck-done-gone-wrong!" fluff I got so sick of on Star Trek; instead, the virtual reality aspects offer thoughtful, fascinating social extrapolation (there are at least two really solid social SF ideas in the pilot), and when things do go wrong, they go wrong in ways that a) emerge naturally from the idea of immersive VR and b) set up some very interesting mysteries.

The show is set on a deep-space ship, the Phaeton, as it approaches the "go or no-go" slingshot point at Neptune. Either they turn back there, or they turn on the Orion drive (yes, it's as cool as you'd hope) and strike off on a ten-year mission to Epsilon Eridani. The mission seems to be funded by Fox TV, and for their investment they've turned the mission into a reality TV series, a la Big Brother, called Edge of Never. This adds another layer of social commentary and interpersonal tension, and raises the question of how truthful mission control is being. (Is Earth really beset by environmental crises behind them, or are the producers telling them that to boost drama?) The ten-year mission gives a compelling reason to keep using the VR environment, even when it proves to be glitchy — without that escape, they're apt to go stir-crazy and turn on each other.

The cast is almost too perfectly diverse, but I'm not going to complain. It's handled well — in particular, the first time we see the gay couple, they're squabbling in the kitchen, and I thought, "Oh, great — they're giving us feisty queens in space." Then the couple complains to the reality TV producer that he keeps portraying them as feisty queens in space to boost ratings. Ha!

The series is most likely doomed, which makes me sad. They set up a bunch of really juicy mysteries and conflicts that I'd love to see unfold, and they probably never will. That said, I'm told the final decision is yet to be made, and will be influenced by the number of people who watch the pilot. So: